Why We Get Fat:
An Interview With Gary Taubes
- Part 1 -

Gary Taubes is a well known science journalist whose recent books Good Calories, Bad Calories and Why We Get Fat have helped to popularize the low-carbohydrate diet and to detail the science supporting the health benefits of such a diet. Taubes was also featured in the New York Times, with his piece "What If It's All Been a Big Fat Lie?" in 2002.

Good Calories, Bad Calories lays out Taubes' argument that carbohydrates are fattening in excruciating detail. And since I'm a physiology and exercise geek, I love its over one hundred pages of footnotes!!

Why We Get Fat is much shorter, and presents the argument in a way that's much more easily accessible to most people. Why We Get Fatbriefly outlines the science behind why carbohydrates are fattening and how this is borne out in history and science. The appendix also includes guidelines for a low carbohydrate diet.

Basically, Taubes is an awesome (and famous) journalist with the sharp eye to discern good science from crap! And he's not afraid to share his conclusions, even if that means challenging the current dogma.

In this interview we talk a bit about how carbohydrates are fattening, what's involved physically and psychologically when you give up carbs, and how the intricate dance of hormones that regulate body fat (adipose) tissues works. You can watch the interview on YouTube (above), or read the transcript below.

So Gary, thank you very much for the interview. And, in a nutshell, what makes us fat?

In a nutshell, the argument I'm making is pretty simple. It's 'obesity is a growth disorder', just like any other growth defect. The hormone involved is insulin, and if insulin is involved, you have to assume it's the carbohydrate content of the diet.

And… for… 50 to 150 years, depending on how you what to look at it, or almost 20 years now, there has been this conventional wisdom that carbohydrates are fattening. And there's evidence that if you take the carbs out of the diet, and replace them with fat, you can lose weight pretty easily, and without hunger and without the kind of deprivation you feel on other diets.

So I would say carbohydrates make us fat.

They're confusing 'ketosis' with 'ketoacidosis', which is a condition you get in diabetes where ketone levels skyrocket. It's like, you know, ketosis is a pretty normal state. I mean, in the morning when you wake up your body is secreting, your liver is pumping out some ketones. Not as much, so… You know, it's a kind of knee jerk response that this has to be bad because if your'e an uncontrolled diabetic your ketone levels will be ten times as high. And…

It's a primitive, kind of, response to why this diet must be bad for you. And you know, again, I'm not arguing that you have to be in ketosis. I'm saying that carbohydrates are fattening - don't eat them.

One way to deal with that is to do a diet where, again, you increase fat consumption sufficiently so that you are in ketosis. And if you are overweight, really obese, it's probably a good idea to do that. But it's not necessary.

So, if you were put in charge of, like, public health policy - you woke up the next morning and you were in charge of U.S. dietary health, what would you do? What's, like, the first thing you would do?

If I was king of the universe, what would I do?

Just for the food.

I would probably somehow remove sugar from the food supply. Sugar and high-fructose corn syrup.

And I would do this in part for my children, and all children everywhere. I just… As a parent, it offends me at how difficult it is to buy a food that doesn't have sugar in it. And doesn't have far more sugar in it than necessary to make it sweet. And so, yea, if I didn't get rid of sugar entirely I would lower the sugar content of foods by, like, a factor of five. Which is probably sufficient.

And again, that's speaking as much as a parent of two young sons as it is a person who has done research on nutrition for the past ten years. 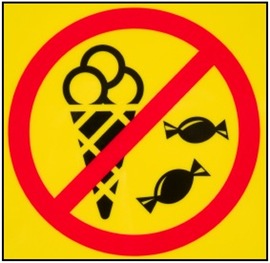 OK, well, you've made the argument in your talks that, as far as just the caloric burn from exercise, that's completely… you're not going to lose weight because of that, and nobody can sustain exercise. But exercise does give you a lot of other benefits…

I'm not… I'm a big believer in exercise. I've been a jock my whole life, I've tried to work out as much as I can.

The argument that I'm making is it's not… You don't lose weight by increasing energy expenditure. The clinical trials are pretty clear about that.

You can do it temporarily, like on The Biggest Loser, yea workout 6 hours a day - you'll lose weight. Just like you can starve yourself and you'll lose weight. But it's not a sustainable (not that exercise isn't sustainable), six hours of exercise a day in order to maintain that weight loss isn't sustainable. And you can't even be guaranteed that the weight won't come back even though you're doing it six hours a day. So that's the point.

The argument is that obesity, weight, this excess fat isn't about energy balance. It's about the way your body is trying to regulate your fat tissue and fat metabolism. And that's what's gotta be fixed. And you don't fix that by increasing exercise, you fix that by removing the carbohydrates from the diet that are driving this insulin secretion.


Oh, and be sure to sign up for the e-zine Starting Strong to get monthly strength training, exercise, and diet tips e-mailed to you - and access to the free e-book Train Smart, Eat Smart: Exercise Nutrition Hacks!

• Click here to leave 'Why We Get Fat: An Interview With Gary Taubes, Part 1' & go back to the Home-page!