Weight training is one of the best methods of strength training! If you want to start weight training safely and effectively, with the best info, diet, and routines, check out the 5 Day Beginner Weight Training Course!

Actually, I lied. It's a very old diet - it's just not very common anymore.

But it has been gaining momentum recently, especially since The Paleo Diet was published in 2001. I really like it, as both a good way to lose fat and simply as a dietary style - hell, I eat paleo most of the time these days - but I have my own tweaks and ideas about how to best use it to get the results you want. ;-)

I like this subject, but if you're in a hurry just jump to part 2 - what you should eat. You can come back and read the background later. 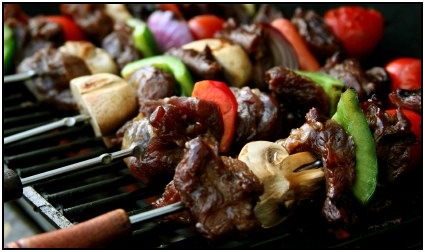 OK, So What Is 'Paleolithic Nutrition'?

Paleolithic nutrition, or the paleo diet, is a diet based on what human ancestors normally ate during the paleolithic period. That is, about 2.5 million years ago till around 8,500 years ago.

On a basic level, it's relatively low in carbohydrates and high in protein compared to the modern American/Western diet. It focuses on very unprocessed, fresh food.

Loren Cordain and The Beginning...

The Paleo Diet by Loren Cordain, Ph.D., introduced paleolithic nutrition to the general public back in 2001. Cordain is a professor of anthropology, which led him from studying hunter-gatherers and our evolutionary ancestors to developing the paleo diet.

And his book was sort of a dud. It didn't do very well. Initially…

Since 2001, though, the number of people following this diet has greatly increased. The huge growth of the internet during this time also had a role to play, since different people have come up with their own spin/stance/experiences/ideas about what exactly paleo diets are - and how to 'eat paleo'!

Arthur De Vany and Mark Sisson are two of the most influential paleolithic nutrition authorities, and each has his own book (or books!). While they agree on several central tenets, the biggest of which is no grains, their details differ.

Arthur De Vany (Art), a Ph.D. professor of Economics at Berkley (and a former athlete), champions a very strict paleo nutrition diet. He sees the human body through the lens of economics, with special attention to how sugar influences insulin release - and he publishes regular updates for subscribers at his blog, ArthurDeVany.com.

Art recently published The New Evolution Diet in 2010, a guide for his way of eating, exercising, and living. It's a fascinating read because of the simplicity of how he presents his ideas, as well as the tons of footnotes to scientific papers if you're interested in all the boring details - like me. ;-)

Mark Sisson was a professional athlete which he combined with a B.S. in Biology. He was led to paleolithic nutrition and evolutionary fitness after years of traditional marathon running and eating lots of pasta - and just wanting an easier way of eating healthy and staying fit.

His blog, MarksDailyApple.com, is where he blogs about everything related to primal fitness, nutrition, and life - and promotes his books and supplements. With frequent digressions into only slightly related subject matter, like pre-industrial sleep patterns and sustainable farming.

He's less science-y than Art, but definitely more fun to read. And since his blog is free, go looking there for beautifully photographed and delicious paleolithic-nutrition-friendly recipes!

...Along With Paleo Fitness, or Evolutionary Fitness

Along with eating right, exercise is apart of the diet. Why?

Well, to look fit (and be fit), you need to exercise. That's it.

Also, paleo fitness champions a 2 - 3 times a week exercise schedule that is a lot less regimented than most usual workout routines. Which is not optimal for reaching your peak strength and athletic ability, but certainly sufficient if you just want to look good and be generally 'fit'.

What NOT To Eat:

Everybody in the paleolithic nutrition community agrees with eating a completely grain free diet. Humans beings evolved to be hunter gatherers and only fairly recently in evolutionary history, the last 8,000 to 10,000 years, began practicing agriculture.

The argument goes that hunter gatherers relied on hunting and fishing for the bulk of their food, and carbohydrates were not a major part of their diet. Further, grains have really high levels of omega 6 fatty acids, the 'bad' fatty acids that cause inflammation in the body.

This goes along with the 'no grains' rule above. Legumes, like the big peas and beans, have only been widely eaten since the agricultural revolution and thus humans haven't fully evolved to metabolize them yet.

◆ No Dairy (Or Very Limited)

Again, from an evolutionary standpoint, cow's and goat's milk have not been part of the human diet for very long. And while dairy has been used as a food source for many years, from Switzerland to the various nomadic tribes of Asia, the fact remains that it's a pretty recent evolutionary adaptation.

And there are some people who really can't have any dairy - the lactose intolerant!

Loren Cordain and Arthur De Vany take a strict 'no dairy' stance. However, Mark Sisson places dairy in the 'OK but not great' category - yes on high quality cheeses and Greek yogurt. But avoid the plastic cheddar that infests cafeteria food!

◆ No Processed Foods or Refined Sugars

This is a big reason why the paleolithic diet works for weight loss. If you cut all processed foods out of your diet (which you should do anyway, since most of them are principally flour/grain), you eliminate a lot of calorie-dense foods.

You can easily eat yourself into obesity on petit fours, marzipan, pot-pies, and doughnuts. But try eating yourself fat on carrots, sweet bell peppers, and lean meats - it's way harder. ;-)

This also eliminates the high glycemic index foods that stress your insulin production. Thus, his is an excellent diet for avoiding the very modern disease of diabetes.

• Click here to learn more about Healthy Foods to Eat - to Gain Muscle and Lose Fat!