Hydrostatic Weighing
Everything You Need To Know

Hydrostatic weighing, also called 'underwater weighing', is the best way to measure your body fat percentage, hands down. If you're serious about finding out (and tracking) your own body composition, try it!

Weight training is one of the best methods of strength training! If you want to start weight training safely and effectively, with the best info, diet, and routines, check out the 5 Day Beginner Weight Training Course!

It's way more convenient than you might think. It's very accurate. And it's vital if you're following a good plan to get ripped, like the one I've detailed in my How to Get Abs e-book.

How To Measure Body Fat
- By Weighing Yourself Underwater -

Hydrostatic weighing is a method of determining body fat percentage where you are weighed in and out of water. This relies on some fun math having to do with measuring the density of your body in water.

Lean mass (bone, muscle, connective tissue, and organs) is more dense than water, while fat is less dense. Thus, when you are weighed in waterand the volume of your body is measured in the water, we can get a really accurate measurement of your body fat percentage.


Here's the equation for your Body Density (BD):


RV stands for Residual Volume. That's the amount of air left in your lungs after you fully exhale underwater, and is calculated based on your gender, height, and age.

Once you have your body density, plug that into either the Siri or Bozek equation to get your body fat percentage.

But don't worry; when you have your body fat measured this way, you don't have to do the math yourself!

Why Hydrostatic Weighing Is The Best Way
To Measure Body Fat!

Hydrostatic weighing is the most accurate method of body fat measurement around. The only two issues that will contribute to measurement error are...

According to the American College of Sports Medicine, hydrostatic weighing has only about a 2 - 3% margin of error. This is much lower than the error rates for any of the other ways of measuring body fat!

It's Actually Convenient to Get Weighed Underwater

Underwater weighing has the unfortunate reputation of being a royal pain in the behind. The water, scientists in lab coats, and actually finding a place seems hard to do.

But it's actually pretty damn easy!

I found out about the company http://www.BodyFatTest.com from my local gym. They are a company with big trucks filled with all the necessary equipment, which drive around the U.S. helping people do body fat tests.

It's super easy and convenient. Here's what it was like for me to get my body fat tested in early April of 2011. This was a follow up to my initial test in February of 2011, and in the intervening month and a half I was able to drop about 9 pounds of body fat!

First, I went to their website and found that the truck would be coming to downtown Seattle on April 6th, and parking near a fitness club in the morning. So that morning I got up early, caught a ferry over to Seattle and got tested.

The whole setup is in a big truck. It holds the water tank and other equipment. Here's what the truck looks like... 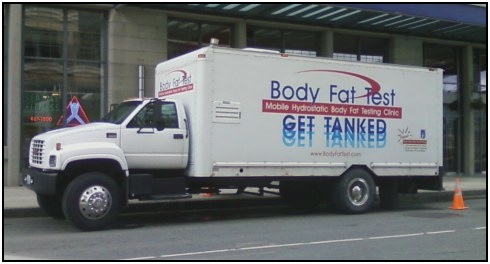 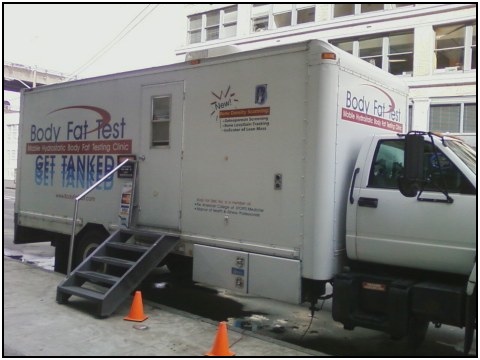 Once you go inside, you get greeted by the person in charge of the truck. You can see Brian Lee in the photo below; he's super cool and friendly, and drives the Body Fat Test truck in the Seattle area.

Brian's sitting at his workstation in the photo below, next to the water tank. 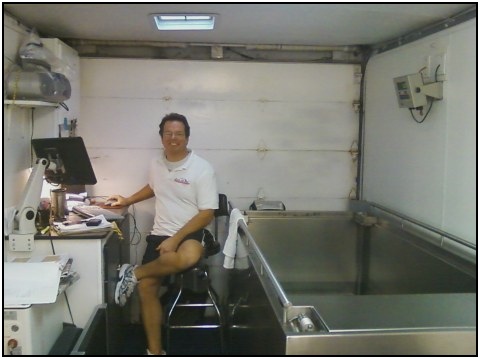 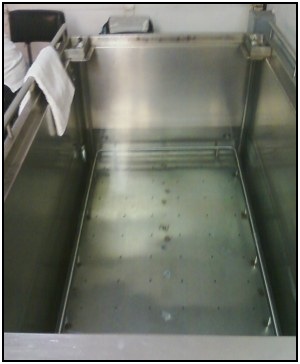 The water tank itself is pretty shallow - maybe a foot and a half deep, with handles so you can easily let yourself down into it. Take a look...

In the other end of the truck are two small changing rooms. You change into your swimsuit, get weighed out of water, and then get into the water.

The water has chlorine in it and is very warm. Just a little colder than a hot-tub.

You can come up for air at any time, of course, but the more air you can blow out the more accurate the measurement will be. This will give the most accurate fat to lean mass percentage ratio of your body. Any extra air in your body will make you weigh less, and thus throw off the measurements.

Here's someone else getting 'tanked'... 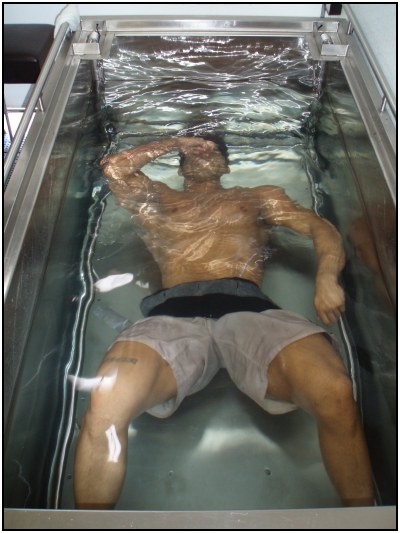 Normally you do this 2 - 3 times, to make sure you have an accurate measurement. Then you get out of the water, dry off, and get your readings.

Take a look at my readings… 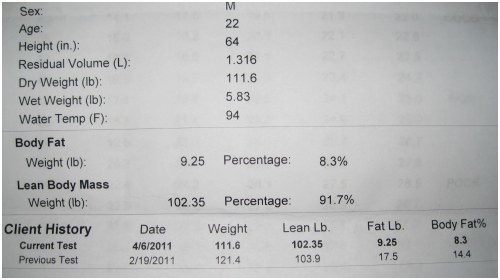 You get your weight, lean body mass, fat mass, body fat percentage, and tons of other info in a little handy-dandy packet to take with you. It's really helpful for tracking your progress and comparing your data to that of other people of the same sex/age group/demographic/etc.

Why I Think Hydrostatic Weighing Is Really Helpful

Underwater weighing is the best way to measure body fat. My own experience with skin fold calipers and bioelectrical impedance analysis (BIA, running an electric current through your body) has been bad.

With calipers it isn't always clear (especially for people who aren't familiar with using them) how much skin to pinch and how to get accurate readings. And if you're off by a few mm, well, let’s just say the margin for error is pretty large.

And BIA is pretty bad. This will depend on the quality of the scale or device, but I've been given readings of 4% body fat when I know from hydrostatic that it's around 14%, and higher readings at other times.

BIA reads water in your body as muscle - because muscle is mostly water, and all the water in your body has about the same conductivity. Thus, drinking a lot of water (or being really dehydrated) can skew the results dramatically.

Your hydration isn't an issue with hydrostatic weighing, since any extra water in your body counts as regular water (just like the water in the tank surrounding you). The water simply doesn't count.

Hydrostatic weighing is consistent and the most accurate method around. Which is exactly what you need.

And, as an added bonus, you'll probably only weigh yourself every month or two. I like this because it relieves you of the excessive angst of trying to track your progress everyday, which can drive you crazy. Those 4 - 8 weeks are plenty of time to drop 4, 12, or even 16 pounds of fat and change your body fat percentage significantly.

It cost me $49 to get my body fat percentage tested initially. They have special rates for students and seniors.

I consider it a worthwhile investment in my health, especially considering the level of information I get. And its accuracy.

Since my second time getting tested was within 60 days, the follow-up measurement in April was only $35. A good deal. Of course, the prices might vary slightly at different locations.

Should You Try Hydrostatic Weighting?

If you're serious about finding out your body fat percentage, go for it. And if you're into fitness at all (as a personal trainer or gym owner), consider trying it just for fun. The experience itself was interesting for me, and I was able to learn more about my body.

If you want a complete and structured plan for getting ripped, check out my How to Get Abs e-book. It contains exact, step-by-step instructions for how to get ripped, with exercise and diet info.

But if you already like your appearance and don't seriously want to track your body fat, don't bother. You're fine as it is.

• Click here to learn more about getting a Six Pack Stomach!

• Click here to leave 'Hydrostatic Weighing - Everything You Need To Know' & go back to the Home-page!