OK, cool. You also mention in your book, you talk a little bit about deep muscles, especially the spine, and how they're used to support the body in static positions. 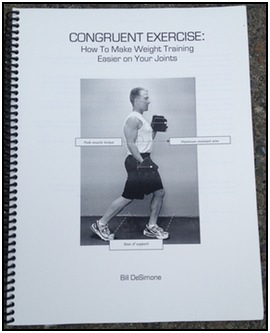 This really interested me personally, because I do a lot of martial arts. Some of them have me holding the horse stance, or other rather awkward static poses, for a long time. So, I was curious about for strengthening the deep spinal and support muscles, "Are regular barbell exercises better for that? Or are simply static stances and holding exercises better?"

Well, the question... “Better” is a tricky word.

The barbell exercises will load the deep muscles around the spine and rotator cuffs, and deep muscles around the hip. The issue is the margin of error. So, if you make a mistake with the barbell, e.g. lose your concentration, or from fatigue, your form breaks down, or your posture breaks down, again, your margin of error for an injury or for setting yourself up for a chronic condition isn't that great.

When you look at the classic muscle chart, you see the bigger more superficial muscles, the ones that you can see the shape of, pectorals, quads, et cetera. The deep muscles hold the hold the joint in place, work statically to hold the joint together, hold the posture of the joint, while the big muscles move the limb or provide the force.

So the relationship is that without the deep muscles, the bigger muscles don't have the stable platform to push against.

For instance, with regard to the horse stance and other martial arts postures: as far as those muscles go, that's probably sufficient for that particular role.

And even if somebody was barbell squatting. Let's say somebody was a power-lifter first, and they had a weakness in the deep muscles. Static contraction might be more appropriate. The real issue in fitness comes about, when do you need that deep muscle work?

If you see some of these so-called functional exercises or other conventional fitness programs, they have you doing many, many different core exercises, many, many different trunk exercises. The issue is whether you really need to do a specific exercise for every muscle you can find in the anatomy book.

I would say that you probably don't. I would say if you have a previous injury or you have a specific task like you describe, or if you just want to do a measure of preventive work, then you do the minimum. But if somebody is not having any of those problems and there's none of those situations applying, it may not be necessary to do a whole half hour trunk class, for instance.

It's just a waste of time to be focusing on every individual, little muscle group in the body.

Well, right, and because the other thing, too, with that approach is the deeper the muscle, the less actual control you have over it. For instance, you can decide to raise your arm and you pretty much know it's your deltoid. You can point exactly, here's the deltoid doing the work. But you couldn't do the same for the infraspinatus, for instance.

You can't say, “OK, I'm going to make my teres minor work this way”. Again, as I point out in the book, the deeper muscles may tend to blend together, so they're not as distinct from each other. Or they're so close in function that you really can't isolate one or the other of them. So, it's probably not the most effective use of your time to try to identify every single muscle, every single position that you might possibly work at.

Yes. You can definitely spend your time just, better, doing more regular exercises in the gym most of the time. So, you talk a lot in your book about congruent training, specifically designed to put less strain on the body and the connective tissue in ways that it is not meant to be stressed from a biomechanical standpoint.

Are the congruent exercises... Obviously, you're tailored them to be appropriate for people with injuries or people who want to go easy on their bodies. Are they appropriate and worthwhile for hardcore athletes and people who are really pushing the envelope as well?

If I was one or if I was training one, I wouldn't want preparing for my sport to add more unnecessary strain on the joints than the sport itself. If you're a football player, getting tackled and slammed to the ground as far as the sport, that's not enough? you're going to add strain to your joints in the weight room also?

Or, an NBA basketball player, 60 or 80 games and more, that's not enough stress on their feet, their knees and their hips? you're also going to add some kind of barbell squat that's also going to put a lot of pressure on them? Even young teenage athletes have wear and tear issues nowadays. Especially lately when there is this emphasis on doing one sport, year round.

So, I personally don't see why a competitive athlete wouldn't want to make their weight training as joint friendly as possible because they're going to have enough wear and tear from the sport. However, having said that, I also know that the aspiring athlete is willing to do any excessive measure if it possibly gives them an extra benefit. So I do understand that a lot of them just aren't receptive to this approach.

I think I mentioned the story in the book where I had someone come into the studio to have their body fat checked. And, they were clearly ripped, really just shredded. But, they were hunched over and twisted. So, I asked what happened and the guy says, "Well, I threw my back out doing CrossFit. I was doing tire flips." I said, "Well, when you get better, train with me and I'll train you just as hard and I guarantee you won't hurt your back."

He said, as he was bent over and twisted and grimacing, "Well thanks. But I really like the class. Look how well it worked." So in his mind, the tradeoff for getting in shape was the risk of an almost crippling injury.

Now, I won't argue with that. That's a choice. I find the most receptive people for this material are probably guys around my age, which is mid-50s. They've been doing everything "right," all along, and maybe they're experiencing more aches and pains then they thought they should have.

So they start questioning. Or they do as I did, they just go back to the material they already read, and it seems to confirm it, but they can't deny that they're having some back ache or shoulder ache.

I get comments like from Richard Winett, who had a newsletter called "Ageless Athletes." About 10 years ago, he was little dubious of the material. Recently he congratulated me on "Congruent Exercise." When I pointed out to him, "Gee, that's not what you were saying 10 years ago", he said, "Well, I hurt a lot more now."

So, the person who is starting to feel some aches and pains, they're very receptive to it. After that, some of the other trainees who aren't caught up in the scene, but they want the benefits of it with as little risks as possible, they're also receptive.

I guess someone like yourself, and Anthony Johnson of the 21 Convention, who put up the presentation video. He and a lot of guys who follow his work are very receptive to the material.

• Click here to leave 'Weight Training and Joint Pain: An Interview With Bill DeSimone' & go back to the Home-page!